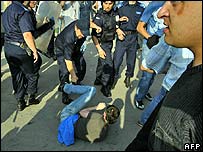 Militant protesters trying to break up a gay rights march in the Romanian capital, Bucharest, have clashed with riot police who made dozens of arrests.

Ten people were reportedly injured in the violence at the GayFest event which saw hundreds of gay rights activists marching against discrimination.

They were also calling for the legalisation of same-sex marriages.

Hundreds of protesters turned out, some throwing eggs, stones and plastic bottles at the marchers.

Correspondents point out that homosexuality is legal in Romania but the public largely accepts the majority Orthodox Christian Church's view that it is a sin.

"Romania does not need you," was one chant heard among the protesters who included Orthodox nuns and a priest brandishing crosses.

Earlier, Bishop Ciprian Campineanu told a televised meeting that the Bucharest march was "an outrage to morality and to the family".

Reuters news agency reports that protesters were injured when they clashed with the police, who fired teargas and used batons to hold them at bay.

Ed Rekosh, a US human rights lawyer who attended the march with his wife, said he believed homosexuals should have the same marital rights as heterosexuals.

Homosexuality was fully decriminalised in Romania in 2001 after partial decriminalisation in the 1990s.

The first Bucharest GayFest march took place in 2005 after an initial ban was overturned.